So it’s a new year and many of us have a few things to tick of the new years resolution – a new car maybe one of them. Many of us will wait until June to try and find a good deal but it doesn’t have to be that way.

There are a few reasons why getting a new car in 2019 would also mean you get a great deal. Today I share 3 of these so you can walk into the dealers this year and get behind the wheel of your new car with a great deal too. : 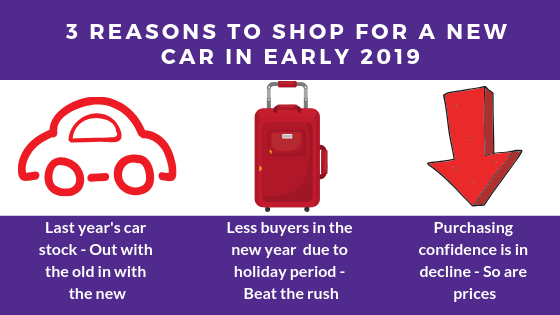 To help the dealers, car manufacturers give them rebates (cash incentives) to sell the older stock. This means that the dealers are very keen to sell those cars and can do great deals on them. Many of the dealers will be getting the 2019 built cars by the end of February so everything for sale at the dealers before that is 2018 built cars.

If you are interested in knowing how much to pay for your new car, use carloop’s free sold price report that helps you compare what dealers are asking with what other aussies have paid.

Less buyers in the new year

After the Christmas and new year’s, most people are still on a family break or are not ready to start the sometimes daunting process of buying a new car. This means that there are less people looking for a new car.

Less buyers in the market means dealers get less customers but still have high sales targets. To help with getting more people through the dealership doors, many dealers have big sales in the months of January and February.

If you can walk into the dealers and are ready to buy, the dealers will be willing to do good deals.

New car sales have been coming down and less people are buying new cars. For example, in January 2019 sales were 7.4% below same time last year. Dealers will find it harder to get to their sales targets and can do some great deals on new cars.

If you have a deposit ready, keen dealers will often give you a great deal. You can also check out our guide to saving money on a new car for more tips.

As you can see, 2019 will be a great year if you are looking for a new car. You don’t always have to wait until June or December to get great deals. Buying early in the year will save you thousands.

I have a passion for cars and technology. I want to help Australians save time and money when finding and buying their next family car.

Should I Trade in at the dealership?

A brand new car without overpaying

Top Tips to Remember at the Dealership

3 things to check when buying a new...

Things to remember when buying from car dealerships

How to save money by picking the right...

Would a diesel family car save me money?

Should you get new car window tinting from...